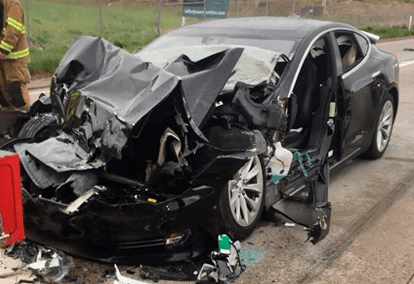 Are electric vehicles safe in accidents?

This is one way in which purely electric cars are distinctly safer than cars with internal combustion engines: They don’t carry any fuel, but they add an entirely new factor to the safety equation.

Almost all electric cars currently on their way to the marketplace use large arrays of lithium-ion (Li-ion) batteries. And, stop me if this sounds familiar, Li-ion batteries have a tendency to catch fire and occasionally explode.

We’ve learned to live with the dangers of cars with internal combustion engines. Automakers have put considerable effort into developing systems that reduce the loss of life — seatbelts and airbags are prime examples — and beyond that we simply accept that a certain loss of life due to accidents is the inevitable price we pay for all the benefits that automobiles provide us. In some cases, that includes saving lives. Just think of all the lives that would be lost if ambulances powered by internal combustion engines weren’t available. Maybe, in the end, more lives are saved by cars than are ended.

But as we slowly make the transition from gas-driven cars to electric cars, are we moving to something that’s even less safe than what we have now? Just how safe are Li-ion batteries, anyway?

After all, there have been a number of documented cases of the Li-ion batteries in laptop computers and cell phones catching fire. The problem relates to the high energy density of the batteries. The amount of energy packed into each battery is quite large relative to its size. That’s why Li-ion batteries have become the battery of choice for electric cars, but it also gives them some of the characteristics of an explosive. And if the small Li-ion batteries in cell phones are a danger, imagine how much more dangerous the huge battery array in a car can be. The battery pack in a Tesla Roadster, for instance, consists of 7,000 batteries under the hood of a single car.

To combat the possibility of these batteries going nuclear, Tesla and other electric car makers are installing a bevy of precautionary devices — for instance, fuses and circuit breakers that disconnect the batteries when the collision detectors become aware that the battery pack is about to sustain damage. Keeping the batteries cool is also essential; the hotter the batteries, the more likely they are to explode. Tesla as well as Ford (in its new Focus Electric model) circulate radiator-chilled coolant throughout the battery pack to keep the temperature as low as possible while the car is running. Nissan, in its all-electric LEAF model, is using an air-cooling system. The division of the batteries into an array (as opposed to one large battery) is also partly a safety choice: The batteries are separated from one another by steel cases to prevent fire from spreading through the entire pack.

Not surprisingly, one of the current leaders in inventing ways to make electric car batteries safer is Volvo, a company that has always considered advanced safety systems to be their major selling point. Their new C30 DRIVe Electric locates the battery pack as far as possible from the car’s crumple zones to keep it safe in a collision. According to Volvo safety expert Thomas Broberg, “We may well see further down the line that cars powered solely by electricity can be made even safer than cars with combustion engines.”